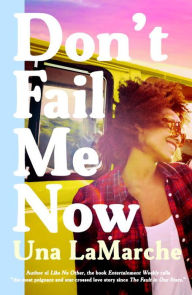 In the midst of her despair, Leah and her stepbrother show up.  They couldn't be any more different from Michelle and her siblings (wealthy, white, and privileged), but Leah and Michelle share one thing in a common:  they have the same father.  And now their dad is dying and has asked the girls to leave Baltimore and come out to California so he can see them.  This unlikely pair, with their siblings, set off on an illicit cross-country road trip full of widened horizons and adventures.

Ostensibly, a typical road trip-and-getting to know you adventure, Don't Fail Me Now is an outstanding example of the subgenre.  Strong characters who are fun and interesting move this story along.  I'm not a fan of YA that put kids in danger, but LaMarche is gentle with these kids and they mostly muddle through on their limited resources (one might even accuse her of soft-pedaling their hardships!).  A lot more could probably have been done with the underplayed class and racial differences, but that was not the story the author wanted to tell.  In general, it was pretty enjoyable.
Posted by Paul at 5:23 PM