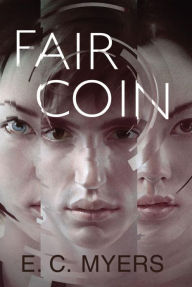 Crazy things are happening to Ephraim.  His mother has ended up in the hospital from an overdose, after trying to kill herself because she believes that he's just been killed by a bus!  In the belongings of the dead person (who does look a lot like Ephraim) is a strange coin. With a little trial and error, Ephraim discovers that the coin appears to grant wishes, sending Ephraim into alternate realities where his dreams come true.  But with each wish granted, unexpected side effects start occurring and Ephraim (along with his best friend Nathan) find themselves in deeper and deeper trouble.

What starts off like a series of Sliders episodes, morphs about half-way through into darker territory when the guns appear and people start dying.  It also gets bogged down around that point by long explanations of what is going on.  A little exposition is a good thing, but my attention and patience lagged as the adventure became a physics lesson.  So, an uneven story.  Ephraim and his love interest make an unlikely (but eventually pleasing) pair but, by the end, I had really lost interest in their fate.  Like Mary Shelley (one of the characters) kept begging, just shoot the bad guy and get this over with!
Posted by Paul at 5:34 PM