Infinite In Between, by Carolyn Mackler 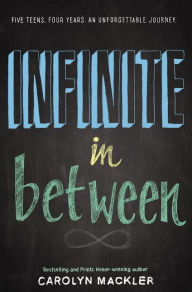 On their first day of high school, five freshmen are put together in the same orientation group.  As an icebreaker activity, they write letters to themselves with a plan to read them together when they graduate in four years.  They then embark on their lives and this novel traces the paths of these kids (and their friends) through high school.

Ambitious and, unfortunately, too much so!  With five characters and their supporting players, there isn't much time to spend on any one of them.  Covering four years, there's quite a lot to keep track of.  The result is a story where each chapter (averaged 3-4 pages!) just starts to get interesting before we're jumping to the next character or month and moving on.  It's thin, superficial, and ultimately not very interesting.  I like Mackler as a YA writer, but this is too much and, even at nearly 500 pages, she can't really deliver a story that gels with so much going on.
Posted by Paul at 8:15 PM