Your Voice Is All I Hear, by Leah Scheier 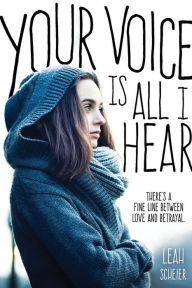 April was obsessed with Jonah before they had even met (she scoped him out before he showed up for his first day at their school).  And, much to her surprise, he's just as taken by her.  Their romance kicks off beautifully, but something isn't quite right.  At first, it's just little quirks that she easily ignores and explains away, but his behavior becomes more and more erratic until he has to be committed to an inpatient psych facility.

He is diagnosed with schizophrenia and, as he struggles with the sickness, April is urged by her parents, friends, and even Jonah himself to let him go.  They are too young and she shouldn't be wasting her life on him, April is told.  But Jonah is the first great thing that has happened to her and she simply cannot abandon him.

Heart wrenching stuff, as one would expect.  I loved April and the way we really got in her head.  She's brutally honest with herself, which wasn't terribly realistic but more fulfilling from a dramatic perspective.  She always knew when she was screwing up, even as she did so.  And I loved Scheier's sensitive and authentic description of Jonah's suffering.  The resulting dynamic between the two of them was captivating and hard to watch at the same time.  As a result, this is a difficult book to get through because you really feel for these kids and the nearly impossible situation they are in.

I was less taken with the narrative, which kept jumping about.  Scheier focused on particular dramatic moments, often without sufficient transition or foreshadowing and I felt like I was being dragged through the story.  It felt like April was telling the story in retrospect years later and just glossing over details -- a realistic approach, perhaps, but not very good storytelling.
Posted by Paul at 11:19 AM