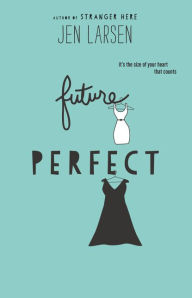 How far would you go to realize your academic dreams?  And would you reach for them even at the expense of your pride and self-respect?

Every year, Ashley's grandmother gives her a card for her birthday which promises her a fantastic gift in exchange for her losing weight.  One year, it was a trip to Disneyland if she would lose fifty pounds.  Another year, it was a new car for losing eighty pounds.  It's never worked.  Ashley has never accepted the offers because she doesn't see any reason to lose weight -- yes, she's a large person, but she's content in her skin and happy with who she is.

Now, in Ashley's senior year, her grandmother has raised the stakes:  if Ashley gets accepted, her grandmother will pay her tuition at Harvard for four years.  It's a dream as Ashley has the grades to get in but doesn't have the resources to cover the costs.  The catch is that her grandmother's demand this time is that Ashley undergo gastric bypass surgery.

The premise is fascinating but ultimately flawed.  Any protagonist worth reading about will ultimately make the right decision, so it is really a matter of waiting until Ashley does so.  And the plausibility of the grandmother's character, so cruel and insensitive that she feels justified in ruining her granddaughter's self-esteem and endangering her life, is hard to swallow.

The writing suffers from a different problem:  extremely uneven pacing.  For the most part, the story follows a familiar dramatic arc with familiar settings (school, part-time job, home) and a story that traces Ashley's personal growth as she struggles to make her decision.  But we digress from time to time to odd settings where the action slows down like molasses and becomes dreamy (in a way that I can most easily compare with the way that the mind wanders on drugs -- a literary high?).  I don't know quite what to make of these digressions but they ultimately don't add anything to the story (consider, for example, the vignette at the art exhibit in the Tenderloin) so they could have been jettisoned.  Subplots about Ashley's transgendered friend and another friend who runs away are only loosely tied in to the story and seem wasted.
Posted by Paul at 7:31 PM