If You're Lucky, by Yvonne Prinz 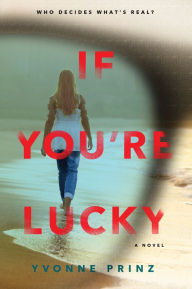 People thought of Georgia's brother Lucky as blessed.  Gregarious and loved by almost everyone, he had an amazing talent for cheating death up until when he actually died in a surfing accident.  At the funeral, Georgia meets one of Lucky's buddies named Fin.  Afterwards, while he's never visited before, Fin decides to stay around and settle in.  Soon, he's working Lucky's old job and dating Lucky's girlfriend.  Georgia smells a rat.  And as Georgia digs into Fin's murky history, she uncovers a series of suspicious mysteries in Fin's life.  In the end, she suspects that Lucky's death wasn't an accident after all and that Fin had something to do with it.

But there's a problem:  Georgia suffers from schizophrenia and she has a history of paranoid delusions.  As a result, no one believes her as she starts to express her suspicions.  And even she doesn't know whether to trust her perceptions.

An interesting psychological thriller, following a heroine who becomes a steadily less reliable narrator as the story progresses.  This isn't fine literature and the writing and the characters seemed merely functional, but it's an entertaining story with a brisk plot.
Posted by Paul at 3:46 PM