What We Left Behind, by Robin Talley 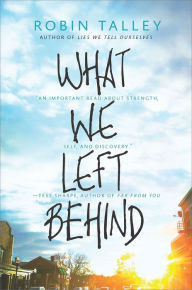 In this NA novel, Toni and Gretchen were an inseparable couple in high school.  And, like many other high school sweethearts, they promised each other that they would stay together even when they went off to college.  They even intended to attend schools in the same town (Harvard for Toni and BU for Gretchen), although it didn't quite work out that way.  At the last minute, Gretchen decided to go to NYU instead.  But even with that last minute shift, they agreed that they would still see each other every weekend.

As you can probably guess, even those revised plans fall through.  Course work and social activities make it hard to get together.  The two girls find themselves drifting apart.  Toni finds friends at Harvard that allow her to explore her burgeoning transexualism and her struggles with gender identity.  Gretchen, feeling Toni slip away, tries to hold on tighter by throwing herself at her lover (which only drives Toni farther away).

The story itself is not full of much suspense, but it's all about the journey.  What makes the novel unique is its focus on gender queer relationships.  Or rather, how relationships fare when one of the parties starts to question their gender identity.  Doing so in the context of a young lesbian relationship is a further twist.  The novel explores many different topics, from Toni's obsessive search for pronouns to the ways that both gays and straights discriminate against the gender queer to what it means to have the person you love change their gender.  Not all of these concepts are new, but their treatment here will open your eyes.

While I was impressed by the story, I was less taken with the characters.  Gretchen was too weak and self-sacrificing.  But Toni annoyed me far more.  Toni's endless experimentation with language and her unwillingness to commit (combined with her demands that everyone had to respect her indecision) just came off as precious.  And there's no way around Toni's privileged background (a point that really gets driven home when she has to briefly consider the idea that her parents might pull out her financing and she might not be able to continue her pricey Ivy League education).  It's not that she's spoiled, but simply that she lives a gilded life.  The far more common situations that young transexuals find themselves in (poverty, danger, and insecurity) are only briefly mentioned and don't threaten Toni's exploration.
Posted by Paul at 4:09 PM