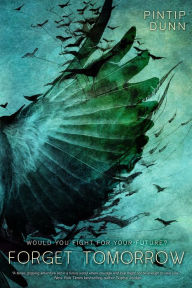 In this innovative dystopian novel (part one of a presumed trilogy), seventeen year olds receive a "future memory" that tells them who they will become.  This then determines the education and opportunities that they will receive for the rest of their lives.  But when Callie receives her memory, it spells out that she will kill her sister.  To prevent her from doing so, she is detained as an "aggressive" and a predicted criminal.  But with the help of a sympathetic guard and a resistance underground, she escapes.  Fate, however, is a tricky thing and the farther she tries to get away from her future, the more she finds herself drawn back to it.

There are lots of fascinating ideas like the "future memories" and some lovely mixing of realistic and science fiction settings, but I found the novel hard to track (and wildly implausible at several points).  Much of the reason for this is because Dunn doesn't make much of an effort to tie all of her ideas together.  There's plenty of action but it doesn't really lead to anything.  And novel concepts - while often fascinating -- aren't actually explored or developed.  One potential explanation is that this installment is merely intended as exposition (with the ideas returned to and developed later). But I still would have preferred a more organic connection of characters and milieus.
Posted by Paul at 7:58 PM