No Shame, No Fear, by Ann Turnbull 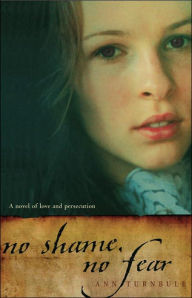 In seventeenth century England, taking a political stand could be a life-endangering choice.  And choosing to follow a religious creed which challenged the social order could easily get you accused of sedition.  Susanna's father sits in jail for refusing to pay tithes or swear fealty to the Crown.  And Susanna herself must leave their small village seek her fortune in town.  There she encounters more persecution but also befriends an idealistic gentry lad who is sympathetic to her faith.  Love develops between them, but it coexists with cruel persecutions.

A stunning and gritty portrayal of the brutal persecution of the early Quakers.  The novel badly needed some historical notes to explain to readers what was depicted (it helped tremendously that I have just read George Fox's Journal a few months ago).  But aside from the fact that the novel will confuse people, I found it compelling.  The two lovers are endearing in their passionate youthful obsession with each other, but the commitment they make to their faith makes an even stronger impression.  It's a fascinating historical adventure with a sequel that I am looking forward to reading.
Posted by Paul at 11:09 AM