Not If I See You First, by Eric Lindstrom 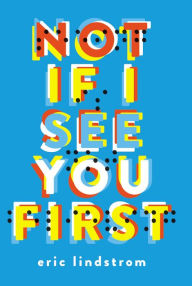 "Not if I see you first!" was what Parker always said to her best friend Scott with when they said goodbye.  Since Parker had been blind for years (the result of a car accident that also took the life of her mother), it was more of a joke between them than a threat.  But after Scott betrayed her, she shut him out of her life, determined to not ever have anything to do with him again.

Parker is a fighter with a fierce set of principles.  It got her through learning to cope with her vision loss.  It gets her through the challenges of practicing long-distance running.  And it's getting her through the more recent loss of her father to an apparent suicide.  But some struggles are impossible to overcome and some forms of blindness affect even the sighted.  When Scott reappears in her life, Parker's attempts to keep everything ordered and together falls apart.

Despite what sounds formulaic, this book surprises.  Just when you think you know the story, Lindstrom takes it someplace else.  I liked being kept on my toes, but there were other things that bothered me.  There is a lot going on in the story.  In addition to her blindness, recent loss of her father, and the reappearance of Scott, there is an aborted relationship with another runner, squabbles with her cousin, and various drams with her friends.  I found that a bit annoying as the story grew hard to track and there were a lot of characters in it. But it was also nice when things happened that seemed more real for avoiding stereotypes.  There's no real resolution in the story either, which will drive some folks batty!