Rules for 50/50 Chances, by Kate McGovern 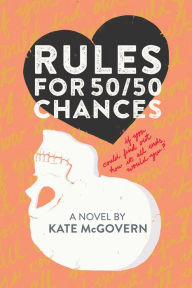 Ever since Rose's mother was diagnosed with Huntington's disease, Rose has lived in fear -- fear of what it would do to her mother and to their family, but also fear of whether she too would get sick some day.  While there is still plenty of time before she could start to show symptoms, the 50/50 chance that they will appear hangs over her and holds her back.

Then, as she is about to turn eighteen, she meets Caleb, a black boy with two family members suffering from sickle-cell.  He challenges her notions about race and her fear of getting sick and pushes her to overcome what is holding her back.  It couldn't come at a more opportune moment as her talent in dance blossoms into the chance of a lifetime to attend an elite ballet school.

It's a novel with a mix of big ideas.  There's the heavy subject of a family coping with chronic illness and a frank look at race and prejudice.  And then there is all this little stuff (falling in love, pursuing dreams, etc.).  Having all this stuff going on probably makes the book seem like a mess, but McGovern juggles it all flawlessly.  But again, the highlight for me turned out to be her treatment of Rose's notions of race.  Caleb insightfully probes Rose's racial privilege (one of my favorite scenes is when she protests that she is colorblind to race and he retorts that he wants the fact that he is black to be acknowledged and does not want her to ignore him).  It's sophisticated stuff and moves us beyond tired tropes of political correctness.  And while Rose frequently comes across badly as both naive and self-centered, there is an honesty and logic to the relationship that drew me in.  And yes, there was a dying mother too.
Posted by Paul at 10:51 AM