The Heir and the Spare, by Emily Albright 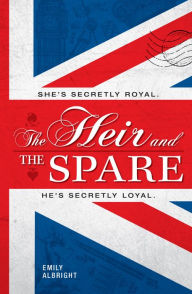 Evie was only six years old when her Mom died, but through a series of letters that she left behind, Evie has been guided by her mother.  It's led her to her Mom's homeland of England and to enrolling at Oxford.  There, however, she has a totally unexpected turn, when she she falls for a classmate who turns out to be a prince.  This in turn makes her a target of jealous girls and the paparazzi, both of whom she finesses with a sharp tongue and stereotypical American brashness.

Her mother's letters keep coming and they lead Evie to the realization that she is herself from a noble background.  This is eminently convenient, as it removes the potential barrier of Evie the commoner trying to ingratiate herself with her prince.  But it raises another problem:  will the prince love her for who she is and not for her title?

An entertaining read, but ultimately silly and frivolous.  While ostensibly about college-aged young people (and featuring some steamy -- but largely non-explicit -- romance), the mindset of the book is adolescent.  From the fantasy of the cute unattached boy who is always available and obsequious in all ways, to the friends who always have Evie's back without any needs of their own, to the easily vanquished baddies, Evie and her world are a simple place.  There's no need to study, no worries about money, and complete self-centricity.  The only thing that matters in this book is whether the prince will kiss her or not.
Posted by Paul at 12:06 PM