This Is Where It Ends, by Marieke Nijkamp 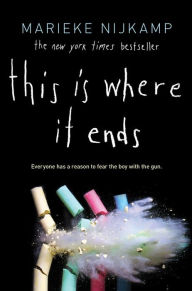 An outcast boy traps his classmates in their school's auditorium and then opens fire, methodically settling scores with his tormentors.  Told in alternating viewpoints by four of his classmates (but crucially, not from the shooter's viewpoint), the story briskly covers forty or so minutes of terror and mayhem.  Each of the narrators have ample opportunity to reflect on what they know about the shooter and his victims.

Despite the dramatic potential of the story, there isn't much of a tale to tell.  People ruminate and tremble with fear, while others die.  And with a large cast of characters, it was hard to get overly attached so the casualties are mostly just a body count.I never felt invested in anyone, although I remained curious about who would live and who would die.

I am stuck on the question of what it is all for?  It's a lively adventure, but what is the appeal?  There's certainly not much of an exploration of what drives a person to commit such an act.  And none of the characters seem to have grown from the experience.
Posted by Paul at 6:19 PM