A Step Toward Falling, by Cammie McGovern 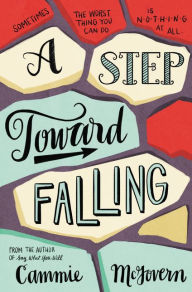 When Emily and a football player named Lucas confess to failing to report a rape they witness, their school assigns 40 hours of community service at a center for people with disabilities (the victim Belinda is herself developmentally disabled).  But the service doesn't bring either of the teens closer to terms with what happened or with a desire to achieve closure with the victim.

Belinda meanwhile struggles with understanding what happened to her and, after some time at home, becomes anxious to return to public life, where she sees Emily and Lucas again.  This sets off some awkwardness, but the teens find common ground and develop friendship and mutual understanding.  Told in turns by Emily and Belinda, the story explores relationship building through the surprisingly similar views of the two girls.

The most powerful part of the novel for me was the way that McGovern showed how alike the two girls are.  While Belinda obviously has more trouble expressing herself and was not always so developmentally mature, there was still much that the girls shared in common, with their same anxieties and desires.  The story achieves a sensitive portrayal of developmental disability that is honest and insightful.  Emily's and Belinda's strengths and flaws are critically (yet sympathetically) treated and revealed a lot.

I did have trouble accepting that the guilt of the Emily and Lucas was as big of a deal as the story wanted it to be.  Part of the problem is that they are such sympathetic protagonists that the story sets them up to be forgivable (McGovern hedges their culpability with a lot of mitigating circumstances).  But is also just seemed a stretch to claim that what Emily and Lucas did (or did not) do was such a heinous offense.  I wonder if the story might have been stronger without that element which, while central, seemed forced and unnatural.
Posted by Paul at 3:56 PM