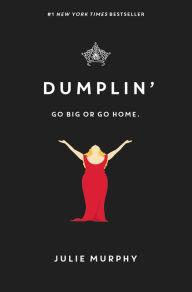 Go big or go home.  Willowdean (or "Dumplin'" as her Mom calls her) has always been a husky girl.  And while she's generally comfortable with her body, it has not escaped her notice that her mother isn't.  Mom is a former Miss Teen Blue Bonnet queen and the obsessed organizer of the pageant.  She'd wish her daughter were one of the thin wisps worthy of a crown, or at least try to become one.  Will naturally resents this and hatches a plot to settle the matter for all by competing in the pageant.  Much to Willowdean's delight, her mother is horrified by the thought.  Far from a victory, though, even Will recognizes that she faces not simply defeat, but also humiliation and ridicule on the walkway.  And in spite of her confidence, Will's relationship with her body is complicated.  When a handsome and athletic boy named Bo shows an interest in her, she can't accept that she is worthy of his affection.

I enjoyed Murphy's sophisticated take on body self-image.  I also liked the complexity of the relationships in Willowdean's life (whether with Bo, her BFF El, friend Mitch, or her mother).  But the story was cluttered with characters and subplots, and it suffered from its ambition.  Concepts like Will's love of Dolly Parton or the rather crucial loss of Will's beloved aunt seemed buried amidst so many less-important threads.  Thus, this was a near miss -- many wonderful ideas, but imperfectly realized.
Posted by Paul at 3:27 PM