Kissing Ted Callahan (and Other Guys), by Amy Spalding 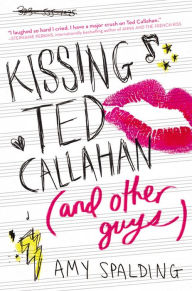 When the other two members of their band start dating each other, Riley and Reid decide they need to start doing serious research and catch up.  They decide to start a journal, taking turns making notes about their attempts to win over their crushes and also offer each other advice about the opposite sex.  Reid, nervous and insecure, struggles to accept that anyone could love him, but Riley dives in headfirst with three separate guys.  There's Garrick (the boy with a famous TV star ex-), Milo (older and capable of scoring fake IDs for getting into over-21 shows), and most importantly Ted Callahan -- Riley's #1 crush.  But shuffling all these guys soon becomes too complicated to manage, let alone document.

Witty and humorous, this is a fluffy book.  I didn't really find Riley's tales of conquest all that interesting and Reid's ethically-suspect romantic pursuit strategies (involving pretending to adopt a pet) didn't click for me.  More than usual, this is a book for a different demographic that takes the story in the casual way for which it was intended.  At least it's a fast read!
Posted by Paul at 1:23 PM