My Life After Now, by Jessica Verdi 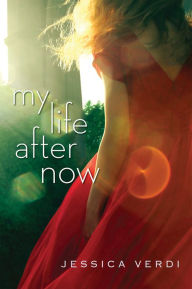 Lucy has a slew of problems (absent mother, straying boyfriend, failure to get the lead in the school's production of Romeo and Juliet, etc.), but all of these pale compared to the consequences of one irresponsible evening.  Finding herself HIV-positive changes everything and puts the rest in perspective  The bulk of the novel then depicts how she struggles with the diagnosis and with how to relate to her family and friends in this new light.

I found the storytelling pedantic at times, like Verdi was lecturing us, and Lucy's character was uneven and inconsistent.  But overall, there are so many wonderful scenes in this novel that I can forgive the rough spots along the way.  The story's crowded and cluttered plot became surprisingly organic and the author seemed quite comfortable with complicated and fitting together initially unrelated characters.  I liked the story's overall message that life truly does go on, even if you're struggling with a terminal illness.  Finally, there's something to be said for bringing out an HIV story in this day and age.  I haven't seen one in a long time and it isn't a bad thing to dust it off and remind younger readers that AIDS still kills even if it's not in the headlines much anymore.
Posted by Paul at 3:27 PM