The Girl from Everywhere, by Heidi Heilig 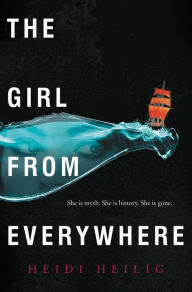 Nix and her father travel between times and places. But they are far from rootless.  Dad is obsessed with getting back to Honolulu in 1868, when Nix's mother was still alive.  He could get there if he could find a map of Oahu made in that year.  With their ship and her father's talents, all it takes is a map to sail to any place or time, real or imaginary.  But getting the right map is tricky.

What seems like a solution at last leaves them tantalizingly close:  in Hawai’i, but two decades too late.  And instead of finding what they want, and become embroiled in a fantastical plot to destroy the monarchy and force the islands into America’s grasp.

A stunning and novel fantasy that combines motley characters, a small dash of real history, and a great psychological conflict between father and daughter.  It doesn’t always make sense and there is little emotional depth, but it is a thrilling adventure with lots of fun moments.  A dash of Indiana Jones with a TARDIS thrown in for good measure!
Posted by Paul at 10:51 AM