The Summer I Wasn't Me, by Jessica Verdi 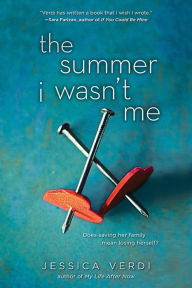 When Lexi’s mother finds her secret portfolio of drawings, Mom freaks out at their homoerotic content.  Mom’s been unstable since Dad passed away and Lexi is terrified that this incident will push her over the edge.  So, when her mother demands that Lexi enroll at a treatment facility to get cured of her “disease,” Lexi feels powerless to resist.  Even though she knows that her sexual attraction to girls is unlikely to change.

Lexi is sent to the New Horizons program, a residential program of brainwashing and indoctrination to learn how to “de-gay” herself.  Much of the process seems to involve being coerced into traditional gender roles as well as adopting heterosexual behavior.  With her mother’s sanity on the line, Lexi is desperate to somehow straighten her life out.  But the program and her new friends there have the opposite effect.

It’s hard to ignore the offensiveness of the religious stereotyping that goes on in the novel.  At the very least, there are a lot of cheap shots as the obviously hypocritical adults spout off soundbites culled from an urban liberal's idea of what conservative Christians believe. At best, Verdi is just being a lazy writer (and not a bigot!), but it soured me on the book.  And by the time that the “exorcist” showed up, Verdi basically flew into absurdity, dragging out every stupid and offensive stereotype about organized religion she could find.

Moving beyond the offensive stuff, Lexi's journey is enjoyable to follow.  From starry-eyed romantic to a young woman willing to commit her life to another person, Lexi’s growth as a person (and maturing of her sexual orientation) is dramatic and stunning.  She’s helped along the way by strong and complex characters like Matthew (who talks tough yet carries secret fears), the beautiful Caroline (who submits to brainwashing and painful interrogations because she can’t come to terms with herself), and Daniel’s fear-driven Judas act.

So, I liked the characters and much of the story, but for a much more compelling and nuanced story about reparative therapy, see Emily Danforth's The Miseducation of Cameron Post (reviewed on May 19, 2012). It contains much of what I liked here and skips the unnecessary digs against religion.
Posted by Paul at 12:48 PM