First & Then, by Emma Mills 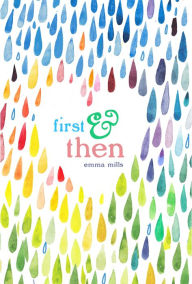 Devon feels like she is drifting through life.  She’s in denial about being infatuated with her friend Cas.  She’s avoiding the entire subject of college.  And she’s definitely not interested in football star Ezra.  But things are changing around her:  her cousin Foster has come to live with her family, Cas has become distant and inaccessible, and Ezra turns out to be really nice.  The rest of it all is predictable light teen romance stuff.

There’s some potential here to explore the expansion of Devon’s family and the relationship between Devon and her cousin is nicely played.  But overall, not much happens here of note.  There’s jealousy and some crossed signals, the obligatory Jane Austen love fest (second only in popularity in YA to out-of-date music – a trope which is blissfully absent here!).  For the most part, though, the characters are forgettable and hard to distinguish.  Unfortunately, the story as a whole is as well.
Posted by Paul at 11:01 AM