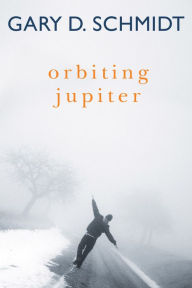 When Joseph Brooks comes to Jack's family to be fostered, he's only thirteen years old, but he's deeply troubled and has already spent time at a juvenile facility.  He's also fathered a child.

Quiet, stubborn, and fearful of physical contact with others, it takes some time for Jack and his parents to break the ice, but gradually Joseph lets them into his world.  Jack learns that Joseph is much more complicated, mature, and intelligent than people have given him credit.  And once admitted in Joseph's confidence, Jack becomes obsessed with Joseph's struggles and (despite numerous warnings from adults) allows himself to be swept away by Joseph's influence.  Jack promises to look out for Joseph and "have his back" which becomes challenging when Joseph sets out to be reunited with his child.

Another well-crafted story by Schmidt, who has developed a strong track record for crafting sensitive books about boys and young men in trouble (a bit of a departure for me).  This is Jack's story of course, but both boys are well-developed.  Strikingly, the rest of the characters are not.  Adults and other children largely come off as flat and disposable.  Still, the story moves at a good clip and ends memorably with some suitable pathos.
Posted by Paul at 2:35 PM