The Summer I Became A Nerd, by Leah Rae Miller 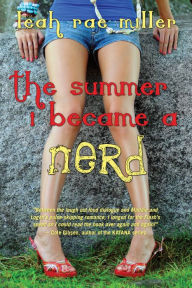 Ever since Maddie learned how uncool comic books and fantasy/science fiction stories are, she's hid her love for them.  Instead, she has carefully crafted a public persona (cheerleading, having a popular boyfriend, wearing trendy clothes) that has established her at the top of the social ladder.  But her secret is in danger of being exposed when she falls in love with the adorable (but certifiably geeky) clerk at the local comic shop.  As she succumbs to his charms and discovers the joy of expressing her passions openly, it becomes harder to keep her two lives separate.

My biggest problem with this fun (but pretty silly) book was buying in on the idea that Maddie actually had a second life.  She did geek so well (Miller obviously enjoyed showing off her knowledge of LARPing) that I couldn't see how it had ever been a secret.  Add to this that there wasn't much in the book about her popular girl/cheerleader side, and I was left doubting that Maddie had ever been anything other than a geek.  For a story about conflicting cultures, that seemed like a fatal weakness, even if it left her more sympathetic to the (presumably geeky) target audience.
Posted by Paul at 3:46 PM