Whisper to Me, by Nick Lake 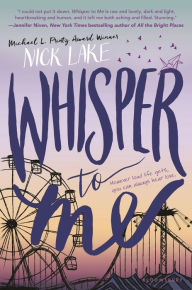 During a summer, Cassie is diagnosed with a psychotic disorder.  As she quickly discovers, it colors people's perceptions of her.  Trying to avoid the stigma, she resists the diagnosis and refuses to acknowledge it to others.  Cassie's healing process is aided and complicated by her father (who suffers from PTSD) and a young man who likes her but to whom Cassie is not ready to open up.  Seemingly unrelated, her Jersey Shore community is struggling with a series of unexplained murders involving young women.

Billed as a romance, this extremely long story (544 pages!) is really more of a drama about mental illness.  The romantic thread plays only a minor part and actually seemed peripheral to the story.  This is an overall issue with this bloated novel.  Major threads (the missing girls and the father's own mental illness chief among them) are inconsequential and unresolved.

Another fault I found was that Cassie herself is a frustrating heroine.  Making mistakes and being imperfect is a typical characteristic in a YA protagonist.  But she develops so poorly, repeating mistakes again and again that you never get much sense of personal growth until suddenly at the end when she is -- poof! -- magically mature!  Without any development on display, we are basically  cheated of the most interesting part of the story and left with a largely unsympathetic main character for the bulk of the story.
Posted by Paul at 8:54 PM