Exit, Pursued By A Bear, by E. K. Johnston 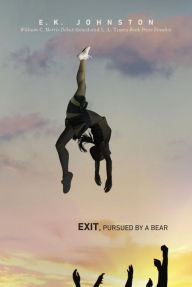 During summer cheer camp, Hermione is obsessed with getting the most out of her last summer.  What she is not expecting is to get drugged and raped.  In the aftermath of the attack, she is unable to recall the details or the identity of her attacker.  Instead, she is left wondering who he is.  Was it a teammate?  Or someone from another school?  But with supportive friends, family, therapist, and community, she pushes on bravely through the ordeal of recovery.

Overall, I found this to be a nice balance between thriller and emotional drama that makes this unpleasant premise into a better than average read.  The greatest strength are the characters.  Hermione is strong and does a pretty good job of bouncing back.  But the real standout character is her BFF Polly, whose toughness and loyalty make her a great sidekick.

But I had issues as well.  She brings up some of the indignities that rape victims endure but resolves them quickly, whether it is rumors at school, victim blaming in the media, or the ordeal of terminating an unwanted pregnancy.  All of these could have been developed further, but Johnstone skirts the issues, leaving the treatment superficial and recalling a more middle-school appropriate treatment (like an Afterschool Special).  I also didn't get the Shakespeare references, which seemed tacked on to the story (perhaps Johnstone was just dying to use the title and had to come up with a way to justify it later?).

In sum, there are not a lot of surprises or new ground here, but Johnstone gives a surprisingly upbeat story with a satisfying ending.  It will raise many questions and issues, and might stir some young minds to ask deeper questions.
Posted by Paul at 8:29 AM