I Woke Up Dead At the Mall, by Judy Sheehan 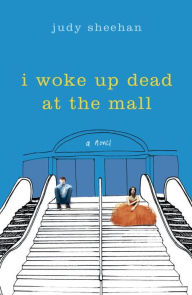 Sixteen and dead at her father's wedding, Sarah finds herself in a state of limbo -- which turns out to be an extra floor at the Mall of America.  It's been specially constructed for deceased teenagers who can't move on because they feel they have unfinished business.  There are other kids there:  angry Lacey, vain and dim Declan, the very adorable Nick, and others.  And there's plenty of rules about what the kids need to do in order to move on (and the things that could cause them to get stuck forever).  And then there's the Boy ("boss of you") -- the being that makes (and sometimes capriciously breaks) the rules.

It's an extremely quirky story about the afterlife, righting some wrongs, clairvoyance, evil stepmothers, bad songwriting, Oprah, and living in New York City.  It's clever and funny.  It will amuse you.

But it's not much of a story.  Sheehan likes to make a funny scene out of an absurdity, but she doesn't really seem to know what to do with it.  There are plenty of laugh-out-loud moments, but not much point to the novel.  It's a bit too much of a downer to be a comedy (Gabrielle Zevin's Elsewhere is an obvious precursor), it's too flippant to say much about faith, the righting-of-wrongs stuff moves the story along but gets mired in a lot of silliness about "angels" -- it is a narrative mess.  The most endearing characters are the silly ones (Declan, Bertha, the Boy).  Sarah and Nick and just plain boring.  The novel will still amuse you, in spite of all that.
Posted by Paul at 8:02 PM