The Great American Whatever, by Tim Federle 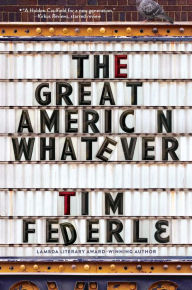 Quinn and his mother have been adrift since Quinn's sister Annabeth died in a car accident six months ago.  In Quinn's mind, he and Annabeth were bonded over their shared love for film (he wrote screenplays that she then filmed).  It was a team that was destined to join the pantheon of sibling filmmakers (like the Coens or the Wachowskis).  Since her death he hasn't written anything.  In point of fact, he hasn't done much of anything.  Skipping out of school and avoiding people, he only really hangs out with his best friend Geoff.  His mother is just as bad, loitering around the house.

But then a chance meeting with a hot guy named Amir gives Quinn something to make him alive again.  And seeing how that can be, he starts to dream about fixing his life.  Meeting up with an old friend and inspiration (and now a successful screenwriter) also helps him see his future potential.  But he is discovering things about his sister that threaten his rosy picture of how things were.

Guy authors generally fall flat for me -- all snarky jokes and not much depth to their characters.  Federle gives Quinn lots of loving attention, but it was hard to feel much for the result. Moping characters have never really attracted much sympathy from me, and obviously cluelessless lack appeal and dramatic potential.  The relationships between Quinn and the two guys in his life never really bloomed for me (famous screenwriter friend was a throw away). The relationship with Amir lacked much spark and Geoff was just a typical sidekick.  Quinn's relationships with the female characters are even worse.  Pedestaling his dead sister annoyed me (and what was with Quinn's strong reaction to the idea that his sister could have been in a romantic relationship?).  Mom had a completely disposable role -- she was paralyzed with depression for half the book and then suddenly fixed her life.  In sum, there just isn't much here to latch on to.
Posted by Paul at 9:45 AM