The Secret Language of Sisters, by Luanne Rice 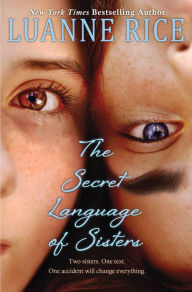 An auto accident leaves Tilly's older sister Roo paralyzed and in a coma, unable to communicate.  People doubt that she will ever recover and some believe she might even be brain dead.  But Tilly maintains the hope that Roo is "there" and she is able to show that Roo is suffering from "Locked In Syndrome." An ambitious young doctor is brought in who has had experience working with such patients and he develops devices that allow Roo to speak and even to manipulate objects around her.  But jealousy between the sisters threatens to divide them just as they should be coming together.

I rarely find that successful adult literature writers are able to cross over into YA.  Unfortunately, Rice proves the rule here.  She writes a good story but doesn't really have the tone right.   The two sisters sounded more like they were in their twenties than in their teens. It wasn't simply that they were mature and well-spoken, but that their tastes are too complex and their way of relating to each other too grown up.  The girls' bond seemed wise beyond its years and the jealousies lacked the angst, doubt, and awkwardness that would make it authentically adolescent.
Posted by Paul at 11:48 AM