The Way I Used To Be, by Amber Smith 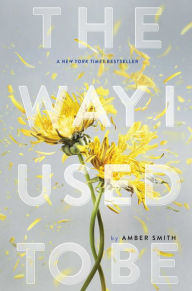 Books about sexual violence and rape walk dangerously close to exploitative fiction, but when done well they can be as stunning.  Take, for example, Laurie Halse Anderson's Speak and Sarah Dessen's Dreamland which both hold spaces in my list of top ten favorite YA novels.  I'm not ready to add The Way I Used to Be to such exalted company, but it is certainly a superior specimen.  This novel delivers.  As a survivor myself, I'll admit to having a soft spot for stories which appreciate the nuances and complexities of the experience (although I fully understand folks who shy away from books on these topics altogether on principle).

The assault that the story centers around takes place right in the beginning of the novel when Eden is fourteen and, while the story will revisit the events surrounding the attack at later points in flashback, the bulk of the nearly 400 pages that follow trace Eden's fall from grace over the next three years.  Her lack of ability to cope leads to self-destructive behavior that teeters between pitiful and distasteful.  Smith wants to drag her heroine into the gutter to show how destroyed she is but at some point even the reader starts to lose faith (grownups are warned that the book's depiction of illicit drugs, underaged drinking, and risky sex will definitely encourage grey hairs!).  That there is some redemption in the end makes the book worth reading to the end.

And that basically underscores my issue with the story.  Smith wants to show the corrosive impact of rape on the psyche and she does this so thoroughly that there isn't much room for escape.  It takes a little deus ex machina in the end to break the stalemate.  And even then, Eden is so tightly wound and so hardcoded into her destructive trajectory that it's a bit of a close call.  The issue with that is that Eden ends up being an unsympathetic character (a brutal thing to say and we can debate it, but when you look at how horrible she is to the people around her, you do start to lose faith).  That is part of the point and I wouldn't change a thing about her depiction but it creates one heck of a quandary for the author!  I really felt for Eden, but I didn't really like her.
Posted by Paul at 8:32 PM