100 Days of Cake, by Shari Goldhagen 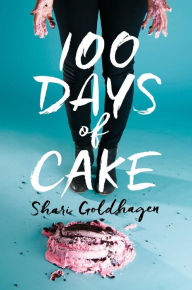 A year ago, Molly had a breakdown at a swim meet and subsequently was diagnosed with depression.  And since then, Molly has wallowed and tread water.  Her mother and sister don't know how to deal with her and respond and dramatically different ways.  Mom keeps baking her cakes in the mistaken hope that they will pick her up (unfortunately, she's a bad cook!).  But her sister, instead, is perpetually angry at her and acts out.  As for Molly, she can't seem to pull herself out of her funk.  The sole bright spot is her job at a fish store.  But when the owner announces that he's shutting down, she doesn't know how she'll keep things together.

A slow and frustrating story that is sort of about depression, but meanders into lots of other territory -- inappropriate relationships, Golden Girls episodes, eighties and nineties music (is there any other?), and sisters.  There are some girl-loses-boy action, but this isn't a romance, but more about self-help.  There are a few bright spots, but ultimately this just treads water, much like its heroine.
Posted by Paul at 8:42 AM