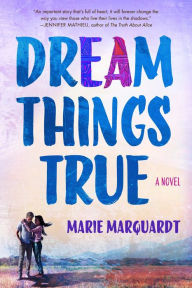 Evan is the nephew of a US senator: a rich white kid with well-honed soccer skills and a sports scholarship waiting for him.  Alma is a smart and poised young woman who dreams of attending college and escaping her family's life of hard manual work and poor wages.  But nothing is that simple when you're undocumented.  And what Evan takes for granted in his life -- safety and security -- are the things that Alma most longs for.  It's a love story of two kids from very different backgrounds who find themselves in the middle of the immigration debate.

Marquandt, who is herself well ensconced in the issues, has a lot to tell the reader.  Authors on a crusade tend to write pedantic and preachy books.  This novel, to its credit, more often than not avoids that curse, but it is lying there just under the surface.  And through the voices of Alma's guidance counselor and an immigration lawyer, we are treated to a earful of facts and figures.

My other complaint is the way the story ended, but that's more personal preference than an issue in the writing.  There is little happiness in the end and even less closure, as Marquardt has chosen a realistic (but not very dramatically satisfying) finale.   I accepted it, but it was frustrating nonetheless.  But perhaps that is a good thing?  This is a good story that introduces a lot of issues that sheltered readers (such as myself) will have given little thought to.  At a time when it is easy to speak of walls and simplistic solutions to complex problems, it is good to have a reminder that life is complicated and doesn't always have closure.  A related criticism is the huge swath of issues covered in the novel.  In addition to immigration itself, Marquardt also tackles sexual violence, teen pregnancy, racism and prejudice, privilege, and marital discord.  At times, these seemed distracting, but it is to the author's credit that the story has room for so much else going on (just as in real life!).

It would also be a mistake to see this as only an issues story, as the characters are multifaceted and memorable.  Alma and Evan are interesting characters, full of strong feelings and the integrity to carry through on them, but at the same time idealistic and naive enough to be plausibly adolescent.  The supporting characters (Evan's cousin, Alma's friends, and the guidance counselor in particular) play surprising roles that break free of typical YA tropes.  Finally, antagonists in this world have an uncanny ability to become heroes here.

Dream Things True then is a busy book with characters that have a lot on their minds and a story that allows them the leeway to explore most of it.  The freedom to pursue dreams is key among the themes, but the reality that the world does not always grant wishes, that so much else is going on at the same time, and that people are neither good nor evil are the means for Marquardt to create a truly multidimensional story of life.
Posted by Paul at 10:38 AM