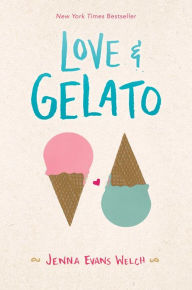 After her mother dies, Lina discovers that she has a father in Italy whom she’s never met.  With her only other living relative (grandmother) too old to care for her, she’s sent to him.  Upon arriving, she is greeted by another surprise:  her mother’s journal, covering the period of time that Mom spent in Italy and the story of how she met Lina's father.  But the more Lina learns, the more complicated she finds that history is.  With the help of a boy next door, her search takes her across Florence and all the way to Rome, stopping at a number of beautiful and romantic sites.

Meanwhile, Lina’s own love life is taking off.  Torn between the neighbor and a super hot guy she met at a party, she finds herself making all the wrong choices.  In the end, it will take a major intervention (in the form of The Dress) to make all things right.

In other words, it is silly romantic stuff.  Dead mother, hot but clueless guy, sensitive guy who conveniently makes himself available, lots of unsupervised time, food and clothes without financial worries, and of course a heroine who is shy and bashful yet sexier than she knows (obviously, since she can score any guy she wants!).  Of course, the book was fun to read, but not terribly good for you – the literary equivalent of gelato.
Posted by Paul at 10:28 AM