Queen of Hearts, by Colleen Oakes 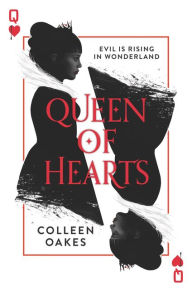 In Wonderland, Princess Dinah is counting the days until her coronation, when she will share power with her bloodthirsty father, the King of Hearts.  But Dinah has never been popular and when her father introduces his bastard daughter to the court, Dinah knows her position is threatened by her greater popularity.

Yet Dinah has friends she doesn't even know and people looking out for her.  An anonymous tip leads her to explore the dungeons for a woman driven insane by the king's torture.  And before she can even come to grips with what it all means, the stakes get raised.  As her nervous aide constantly hectors her, she is late and time is running out.  She must figure out what her father and his evil advisor Cheshire are up to, before she falls afoul of their plots.

This is part one of a series that twists the Wonderland of Alice into something entirely (and unbelievably) weirder.  It's a very dark tale and only loosely related to Lewis Carroll's world, but will amuse people who enjoy alt universes.  It's colorful and Dinah makes a pretty interesting heroine -- a bit rough and intense, but full of plotting and intrigue.  In this first part, there's a lot of exposition and things aren't yet moving along, but future installments look promising.
Posted by Paul at 3:52 PM