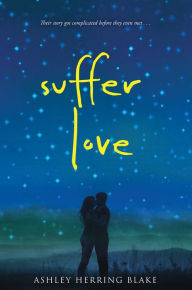 Hadley and Sam are both experiencing families that are coming apart (or already have broken up) because of infidelity.  And this shared suffering and alienation from their parents, despite expectations to the contrary, draws them to each other.

But it is all based on a secret (one which Sam knows but Hadley does not) -- that their similar situation is no coincidence.  Against the odds, the woman that Hadley's father cheated with is Sam's mother.  Should Sam tell her?  He worries that the revelation will poison the trust that they have developed.  But what sort of trust is based upon a secret?

The result is a surprisingly effective meditation on infidelity, betrayal, trust, and forgiveness.  This is taken on in a variety of forms.  Beyond their parent's indiscretion, there are the breaks between parents and child and the break between Sam and his sister.  And, just to drive the point home, the relationships that Hadley has with another boy, his relationship with his girlfriend, and a relationship and breakup between Hadley and Sam's BFFs add more complexity.  As I started reading it, it all seemed quite random, but Blake stitched it all together nicely.  I enjoyed the way that she was about to universalize the story.
Posted by Paul at 9:52 AM