The Fall of Butterflies, by Andrea Portes 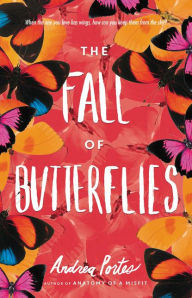 When Willa says goodbye to her misfit friends at the "freak table" and that she will see them soon, she knows she is lying.  It's not because she is getting out of What Cheer IA and getting to attend a snooty rich person's school in the East and hopes to never return. It's because she knows that she intends to soon end her life out there.

But those intentions get quickly sidetracked.  The new school takes her by surprise.  There's a brief encounter with the supernatural which brings her into the orbit of a golden girl named Remy.  Remy lives a privileged life and she and her friends introduce Willa to how the 1% live and party.  It's a completely alien lifestyle and Willa is in over her head. Initially star struck, she comes to understand the ugly underbelly of Remy's life.

Combining the usual tropes of the boarding school genre (drugs, lack of supervision, and very little studying) and the stereotypes of simple honest Midwesterners and jaded jetset Easterners, you're not going to find much originality here.  Willa's voice is entirely too mature for her age, but it fits the story which is mostly about driving home the message that nice girls end up first in the end (and drugs and sex don't really solve anything).  The plot meanders a bit and a number of subplots just fizzle away (including Willa's suicidal intentions).  Still, it's a brisk read and enough of a decent fantasy to make it enjoyable.  If you like these sort of stories, I'd suggest e Lockhart's The Disreputable History of Frankie Landau-Banks as an alternative.
Posted by Paul at 2:10 PM