The Last Boy and Girl in the World, by Siobhan Vivian 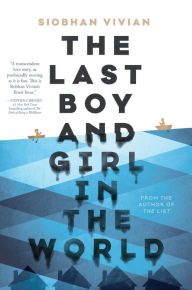 Keeley's hometown of Aberdeen has never had much going for it and most anyone with a chance of success is heading far away.  Still, when flooding threatens the town and the government moves in with plans to demolish the entire place, build a dam, and flood it, Keeley gets caught up in an effort (led by her Dad) to save the town.  But everyone has their own motivations and Keeley isn't always sure of what hers are (much less those of others).  And her friendships and alliances quickly come under strain as people start to show their true colors.

There is a tension between the tragic story of a town being literally consumed by greed and the elements and Keeley's seemingly vain search for love.  At first I (like many other readers apparently) really wanted to read the seemingly more important story of a town's survival.  The counter story about Keeley and her romantic feelings for a special guy seemed distracting and irrelevant.  But about halfway through the story, the heavy rain showers, abandoned buildings, and relocation traumas truly become less significant when compared to the human drama which is playing out.  Based on the other reviews I have read, this is the point when many readers turn to hating the novel, but I was surprised to find that it actually became far more interesting to me.  After all, what could be more interesting than the massive destruction of property?  Maybe the way that hearts can be betrayed by those we love and by our own best-intentioned acts.

The novel ends a tragedy, but one from which the characters will rebuild themselves.  And it is the seeds of hope at the ending which make this moving story worth the read.  Everything else is just window dressing.  After all, if you want to experience the trauma of a town being flooded to make a lake, look at Dorothea Lange's Death of a Valley.  But if you want to read a story about a young woman who fights with all of her heart for what she feels is right, makes terrible misjudgements and pays steeply for them (and yet comes back stronger and wiser), read this book!
Posted by Paul at 7:50 PM