The Unexpected Everything, by Morgan Matson 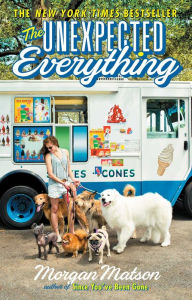 Andie likes to have things planned out and to avoid surprises.  She’s got her summer all figured out, but then her father is accused of public corruption and her summer scholarship is cancelled.  Suddenly, she’s in free-fall and finds herself working as a dog walker…and she doesn’t know the first thing about taking care of pets!

But for a summer where nothing happens as expected, wonderful things are occurring:  her Dad is spending time at home and the two of them are finally getting close.  She’s falling in love.  But a life without plans is a life where everything is unexpected and that will challenge her in all sorts of ways.

It’s a very long (500+ pages) rom-com with a lot of rambling.  Obviously, some editing would have helped.  While there are no real plot surprises, the story also came with a few character surprises of note.  I usually don’t like YA parents and I’m leery of going with the middle aged guy (since I resemble him and he usually is a dweeb or an idiot or both) but Andie's father is a hilarious character and gets to have all the good scenes (Mom is, of course, dead – as so often happens in YA!).  But a few good characters does change the fact that the story is basically the typical jealousies, insecurities, parties, texting sessions (with some emojis to keep this hip), and some pretty over-the-top romantic comedy tropes (the ending is literally stolen from Notting Hill).  It’s lovely beach read stuff.
Posted by Paul at 8:41 AM