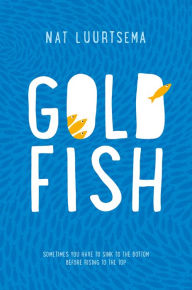 After Lou fails to qualify for the British Olympic swimming time trials, she feels lost.  Her best friend has made it and left her for training camp.  And Lou realizes that after nine years of constant practice, there isn’t much else in her life.  She lacks the social life of her older sister or any particular academic talent.  Her greatest moment appears to be when her purse flipped over in class and spilled Tampons all over the floor.

But then she meets three boys with their eyes on winning a slot on the TV show Britain’s Hidden Talent.  They have dreams of getting on with a synchronized swimming routine.  And they want Lou’s help to make it happen.  Never mind that none of them are serious swimmers or that Lou has never coached before!

A cute and funny adventure with a big heart, but not much character development.  As with much British YA, there isn’t much depth here and the whole thing plays out as a comedy (with more than a few comic digressions in the mix).  It’s hard to take anyone or anything seriously and the story itself grows a bit repetitive.  But it’s lively enough if that is what you want.

Why British YA writers shy away from doing serious character studies is interesting in itself.  There seems to be an unspoken assumption that adolescents are able to handle it and need to be sheltered in emotional safe zones.  They can have adventures, but any serious repercussions are always handled by parents and other adults.  As a result, the adventures exist in a bubble.  This makes the characters seem shallow and clueless about the world.  Adolescence certainly has enough of that already, without the additional nannying.
Posted by Paul at 9:22 AM