Places No One Knows, by Brenna Yovanoff 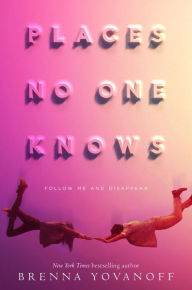 Waverly can't sleep so she runs through the night.  And when she does sleep, she finds herself transported to the bedroom of Marshall.  It couldn't be a more incongruous set-up.  Waverly is popular, athletic, and an academic overachiever.  Marshall is a stoner, disillusioned, and on the edge of dropping out.  But in the twilight realm, two lost souls connect in a way that they can never do in real life.

A strange and original story about finding an honest voice in a world ruled by social pressure to conform.  Yovanoff's messages about the destructive expectations of adolescent life and peer pressure are nothing new or original, but are explored in a novel magical realistic way.  The nocturnal encounters are just one aspect of this novel's broader exploration of lost souls trying to escape their perceived fate, a theme that is manifested in several different ways.

The story is complicated and not an easy read.  I nearly abandoned it because I frequently lost the track or had trouble keeping up with the characters.  But the ending is particularly strong and made the effort worthwhile.  It is also a book which probably gains in a re-reading (which is rarely true in YA).
Posted by Paul at 8:28 AM