Read Between the Lines, by Jo Knowles 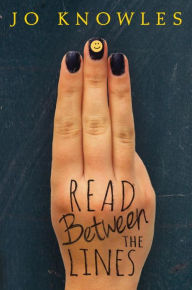 Told in the voices of ten young people in ten separate chapters, their lives interact with each other over the course of a day.  What ties them together is their incomprehension of each other.  This translates into anger and resentment, causing each of them to have a moment when they flip each other off.  This leads in the end to some late moralizing about how we might all be happier if we took a little more time and effort to understand each other.

The result is clever, but often distractingly so.  At times, it is something of an effort to tie characters together.  Also, given the overall structural demands of the story, linking the characters overshadows any significant storytelling.  It is a story entirely too much in danger of being too clever.  Still, I liked the experiment and the ten voices were at least interesting to follow.  Naturally enough, it’s a bit gritty and having the central  organizing conceit being an impolite gesture is a bit risqué.
Posted by Paul at 11:41 AM