The Art of Being Normal, by Lisa Williamson 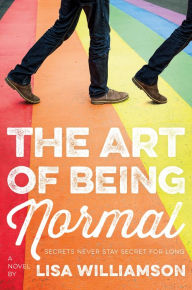 David is a young teen struggling with gender identity and the lifelong belief that he should have been a girl.  His parents just assume he's gay, and he hasn't mustered the courage to speak to them yet.  Leo is a new kid at school who is trying to lay low and not make friends at all (a plan which is thwarted when he attracts the romantic attention of one of the most popular girls in their class).  When Leo comes to David's rescue during a bullying episode, these two unlikely compatriots bond.  But as they soon find out, they share far more in common than either of them expected.

An interesting British take on transgender YA which also finds time to look at classism and racism, as well as creating a nice friendship story.  There's a bit too much effort to spin a happy ending, in spite of the realization that these kids face a lifetime of hardship ahead, but I get that the author didn't want to go out on a down note.  There is not a yet of gender queer literature coming out of the UK, so this novel is notable for that fact alone.  The fact that it is an enjoyable read is a bonus.
Posted by Paul at 11:37 AM