The Cresswell Plot, by Eliza Wass 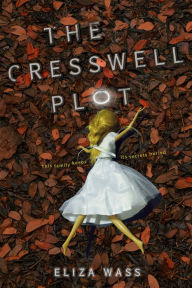 Castella and her five siblings live in the woods in upstate New York, in a state of fear.  Their mother is crippled and their father bordering on insanity.  Raising them on a strict diet of religious fanaticism, he’s isolated the children from their peers.  In preparation for the coming of end times, the children have been betrothed to each other and are forbidden to socialize outside of the family. But the kids can’t help but be curious about the world and others.

In stories like this, there are two things that we commonly encounter.  The first is usually a pretty thorough dig at faith and the casual elision of fanaticism with all forms of organized religion.  To her great credit, Wass goes out of her way to distance this family's belief system from any specific religious tradition.

The second element is usually a tremendous effort to set up physical barriers that explain why the kids stick around.  The most common explanations are physical isolation or restraints.  Wass takes another tact altogether:  she provides her heroine with plenty of opportunity to flee, but puts psychological barriers in her way.  It is not confinement that keeps her around (far from it, she is quite free at all times). Instead, it is her loyalty to her siblings, the years of indoctrination, and her doubts about her own sanity that keep her in place (as they do to entire family as well).  The result is a chilling tale of faith and madness.  It's a fast-paced icky read.
Posted by Paul at 11:37 AM