The Problem With Forever, by Jennifer L. Armentrout 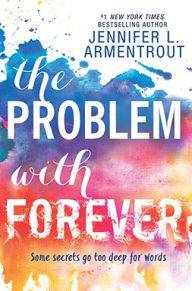 When they were little, Rider always took care of Mallory.  Living in an abusive foster home, it was Rider who literally took the blows that the grownups dished out.  He promised her that he would be there for her "forever" and she believed him.  And with a knight in shining armor, she could hide in silence.  He called her "Mouse."

But when Mallory was injured and the dire state of their arrangement revealed, Rider and Mallory were split up.  She was taken in by two doctors who gave her a stable home and eventually adopted her, giving her a future.  She still has nightmares from those early years, but she's moving on.  What hasn't changed though is her silence.

Four years later, fate finds Mallory starting her senior year in a new school, where Rider also attends.   They haven't seen each other in all that time, but immediately bond again -- a bond that leads to attraction and romance.  But what neither of them can admit is how much they have changed.  And how much their reunion will change them further.

It is a moving story about recovery and survival that is as gritty (and depressing) as the the city of Baltimore, where the story is set.  The story has a lovely dramatic arc as we get to watch Mallory emerge from her shell and gain a voice of her own.  There's no denying the appeal of the complex characters of Mallory and Rider, and even the supporting characters (Mallory's step parents and the bitter Paige in particular).  But the novel is very long and it drags (and even repeats itself).  The overall effect is to blunt the impact of so much of the story.  The ending is a particularly drawn out affair and Armentrout's insistence on a happy ending just seemed too contrived and untrue to the story.
Posted by Paul at 1:39 PM