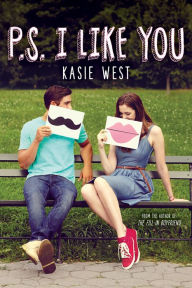 Some YA romances can pack a punch, other are intended more for casual pool-side reading.  I don't shy away from the subgenre because of the surprise enjoyment of finding a hidden gem, but it's a troubled field of mixed quality.  Many of the more popular ones are unreadable by anyone over the age of consent, which suits the publishers and the targeted readers just fine.  Kasie West's latest falls somewhere in between.

Bored in chem class, Lily doodles the lyrics of her favorite song on her desk.  The next day she finds that someone has written a message back to her.  She writes more and the mystery writer reciprocates.  Before long, they have graduated to paper letters hidden on the underside of the desk, and chemistry has become a lot more interesting for Lily.  As hearts are opened and secrets spilled, Lily discovers she's attracted to the letter writer and wonders who he is.  She's secretly hoping it's the guy she's been crushing over, but she fears it isn't.  When she does find out who it is, she's initially shocked and offended, but gradually comes to see the letter writer in the person.

This isn't a novel suffering from subtlety.  One of my least favorite things about it is the way that the story is unnecessarily dragged out as Lily turns out to be the most clueless young person on the planet.  A hundred or more pages before she figures out the love of her life, we're already there and finishing our popcorn.  That can be cute (smiling as you think about how excited she'll be when she figures it out), but taken this far, it grows boring and annoying.

In a different vein, her family (and her siblings in particular) annoyed me as well, but here it's all on me.  Siblings are annoying and West does a wonderful job of portraying the love-hate world of a big family getting along.  Lily's something of a saint amongst them, which seemed a bit too precious to me, but it otherwise sounded authentic.

I'm mixed on the romance itself.  The enemies-becoming-friends thing has been done better.  The initial sparring seemed mean and the explanations of how it was just misunderstandings seemed too convenient.  Really, it felt like some adolescent version of "if he teases you, it's because he likes you" nonsense that I would hope that young people have long since rejected.  I just didn't like the guy and couldn't really see why she would like him.  That didn't make me hate the story, but it made the romance less interesting.  If you don't like the guy as well as the girl, it's pretty hard to sell the reader a romance.
Posted by Paul at 1:16 PM