We Were Never Here, by Jennifer Gilmore 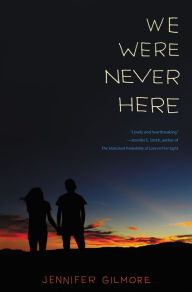 During summer camp, Lizzie finds herself struck down by intense pain, which is diagnosed as ulcerative colitis.  Soon, she's in the hospital and facing surgery. Scared and afraid, she finds comfort from a hospital volunteer named Connor and his dog, Verlaine.  He helps her through the ordeal and she falls in love with him.  It is a surprise when she finds that he likes her just as much.

But as she recovers from her ordeal, she finds that Connor has even darker challenges of his own.  And their relationship, far from being a source of happiness for her, becomes nearly as destructive as it is healing.

While the story wraps up nicely, it meandered too much for my tastes, introducing new characters at regular intervals (seemingly simply to give Gilmore something to write about).  There's the relationship with Connor, but also a sister, two very different friends, several animal adoptions, and a little dating with another boy on the side.  I was hard pressed to figure out the connection between all of this and it never quite comes together.
Posted by Paul at 1:59 PM