Georgia Peaches and Other Forbidden Fruit, by Jaye Robin Brown 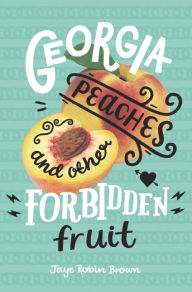 For Jo, there are two things that matter most:  her sexuality and her faith in Christ.  As the daughter of a successful radio preacher, her family's faith is often in the spotlight, but surprisingly she's been out about her homosexuality for some time.  That is, until her father asks her for a special favor: to keep it quiet for the next year.

Dad has just remarried and they are moving to his wife's home in a conservative small town.  He's concerned that, if Jo is out about being a lesbian, things will go badly for them in their new hometown.  She agrees out of loyalty to her father and because she will only be there for a year (it's her senior year at school so she'll soon move on).  It can't be that hard to keep a low profile, can it?

But keeping her promise becomes hard when she meets Mary Coulson, to whom she's attracted.  For a brief period, the two of them carry on a clandestine relationship, but Mary Coulson wants more.  She wants to come out loud and proud, with Jo by her side.  But how can Jo keep her promise to her father, keep her new girlfriend, and maintain her pride all at the same time?

There's only one subject I love to read about more than gender queer teens, and that is books about adolescent searches for faith.  Good books on teens and God are hard to find and one that combine both LGBT topics with religion (in a positive light) are near non-existent.  So, this is a special book.  More so, because the story itself is pretty good.

The other thing I really like about this book is its fairness.  In a book that features lesbians, Christians, and small-town folks, there's lots of opportunity for sloppy stereotypes.  Brown avoids that, treating Jo's sexuality and religious faith with respect and insight.  The fact that these two parts of her life could be at odds with each other is barely addressed (and mostly by peripheral characters).  And while there are a few antagonists to keep the story moving, for the most part, these are characters who interact respectfully and responsibly, providing a cast that I cared about and cared for.
Posted by Paul at 10:05 AM