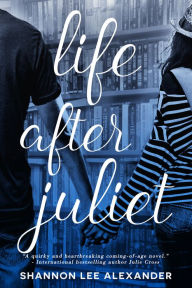 In this "companion" (or, more accurately, sequel) to Love and Other Unknown Variables, many characters return.  But it is the deceased Charlotte who casts the longest shadow.  Becca has never quite recovered from the loss of her friend and buries herself in reading to hold off the grief.

A school production of Romeo and Juliet and the affection of Max, the play's technical director gives Becca a chance to shine.  The opportunity is hard for her to grasp however and it takes much tougher love from jealous (but ultimately sensible) mean girl Darby to get her to start living.

Quirky and difficult to read, I haven't previously been much taken with Alexander's writing (I dumped Love and Other Unknown Variables without finishing it as I found it unreadable).  Her style is too cerebral and mature, her characters simply grown adults in adolescent bodies.  The epitome of rationality and lacking any of the impetuousness of youth or the urge to explore, the characters are "young adult" only in the minds of a writer's circle that have forgotten what it is like to be young.  The result is drab and boring -- a G-rated romance acted out by teens.

What made the sequel more readable than its predecessor is that Becca has room to grow and shows us vulnerability that extends beyond her tendency to self-pity.  And Darby (who never really seems as mean as she's cracked up to be) comes out as an unusual and fascinating protagonist.  The two end up as self-described "allies" (but not quite friends) in testament to a nuanced relationship.  The other characters are similarly complex.  All of which is a way of saying that Alexander is a good writer, and seems destined to creating strong NA and adult literature -- just don't expect the YA experience here.
Posted by Paul at 10:50 AM