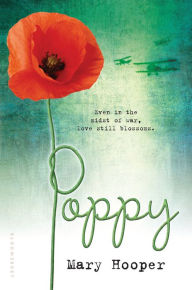 Poppy is making her way as best she can in service to the wealthy De Vere family.  In the back of her mind, she harbors a secret fantasy that she and the De Vere’s youngest son might have the starting spark of a romance.  Given the class differences, this seems unlikely in the current climate.

But the Great War is changing things.  Much of the staff (and the family itself) is enlisting or finding ways to serve the War effort.
While the idea had never occurred to her, Poppy (urged by a former teacher) enrolls in the Voluntary Aid Detachment to serve as a nurse.  It’s hard work, but not so different from being a maid and she takes to it.  Meanwhile, Poppy can’t help but notice that the War is changing social relationships as well, and she dares to hope that it could make a romance with the De Vere boy possible.

A well-researched story of WW I by an established writer of historical YA.  With the general absence of family and the independence that wartime brings, the book doesn’t have much of a YA feel, but it proves fascinating nonetheless.  Unfortunately, I found the romantic angle the least effective part of the story.  It serves a purpose (providing a dramatic arc in an otherwise slow-paced novel) but it really doesn't go anywhere.  While apparently not in the original plan, this story really needs a sequel to tie up all of the loose ends (and so, a sequel there will be!).  Poppy’s life is just beginning.  This first novel is fascinating, but slow reading.
Posted by Paul at 10:41 AM