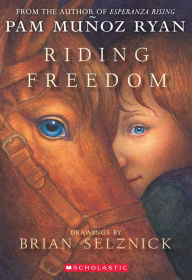 Based on a true story, Riding Freedom recounts the life of Charlotte Parkhurst, an orphan who disguised herself as a man and made a career in the 19th century as a stage coach driver.  Hearing of opportunities to own land out West, Charlotte migrated to California during the Gold Rush, becoming "One-Eyed Charley" and incidentally being the first women to vote -- illegally -- in the United States.

For young readers who love horses, there is plenty of great detail in the book to flip pages for.  As history, the subject matter is fascinating and includes many exciting anecdotes from her life.  But it is hard to know what is fact and what is fictional or embellished (although Ryan claims that she tried to hew as much as possible to facts of Charlotte's life).

Unfortunately, I found the storytelling rough and uneven.  Some of this is because Ryan has only anecdotes to work with, some of this is writing for a young audience, but one also suspects that Ryan found the transition from picture books (this is her first novel) difficult.  Her subsequent novels have substantially improved and are among the gems of middle reader literature.  The key problem with the weakness in this novel is that we never get to know much about our heroine.  That she is brave and smart is clear enough, but her feelings and thoughts are largely hidden (much as they apparently were in real life) -- it leaves a frustrating quantity of mysteries unanswered.
Posted by Paul at 1:18 PM