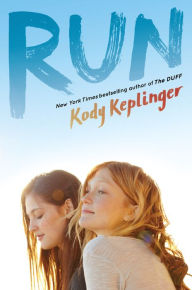 Agnes is legally blind, but as she's grown up, she's seen plenty.  And from a lifetime in rural Kentucky, she knows that she doesn't want to end up stuck here.  But she doesn't stand much of a chance of doing so as long as her parents keep treating her as an invalid.

Bo is the bad girl that everyone loves to gossip about from a family that everyone (including Agnes) avoids.  She is wild and free and Agnes can't help but idolize her.  Despite their disparate backgrounds, they bond.

When Bo's world collapses and she decides she has to run away, Agnes can't help but join her and the two girls hit the road, searching for Bo's estranged father.  In alternating chapters (Bo's in the present and Agnes's in retrospect), the two girls recall the story of how they met and formed their bond, and what they learned on the road.

This is less a sisters-on-the-road story and more character study of how these two young women found companionship and freedom together.  While it took me a while to warm to them, by the end I found myself heavily invested in their relationship and their emotional and spiritual journey together.  In striking contrast to my usual complaint about these sorts of books, I actually wished for less action as the drama often seemed to interfere with the more interesting back story.
Posted by Paul at 11:48 AM