The Female of the Species, by Mindy McGinnis 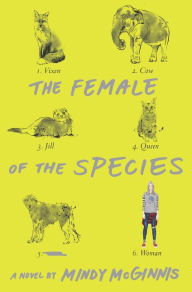 Alex has always been a bit of an outcast, but after her sister is kidnapped and murdered, she seems even more off.  She's quiet and stealthy, and prone to sudden brutal acts of violence.  She’s the only person who doesn’t seem perturbed by the fact that her sister’s alleged assailant was found brutally murdered himself (shortly after being acquitted).

Jack has floated around from girl to girl.  Flat broke and afraid he’ll never amount to much, he’s stuck in a relationship of convenience with the hottest girl at school, which he ought to enjoy but doesn't.  Instead, he is drawn to Alex, who offers a mystery that he finds irresistible.

Peekay (“PK” = “preacher’s kid”) spends her senior year trying to prove to everyone that she isn’t as pure as folks would have her be.  In doing so, she finds herself in the middle of everything, trying to take care of people, but totally out of her depth.

The novel is set in some poor backwater where the kids float through school, hold drinking parties in the woods, and eventually graduate to minimum wage jobs, alcoholism, and meth addictions.  The manners are gruff, the language coarse, and very little in this dead-end life is pretty.  It’s a dark setting for a dark story.  Lots of rude language, sex, and drugs, never mind the violence, which is sudden and random.  I found it very depressing to read.
Posted by Paul at 11:10 AM